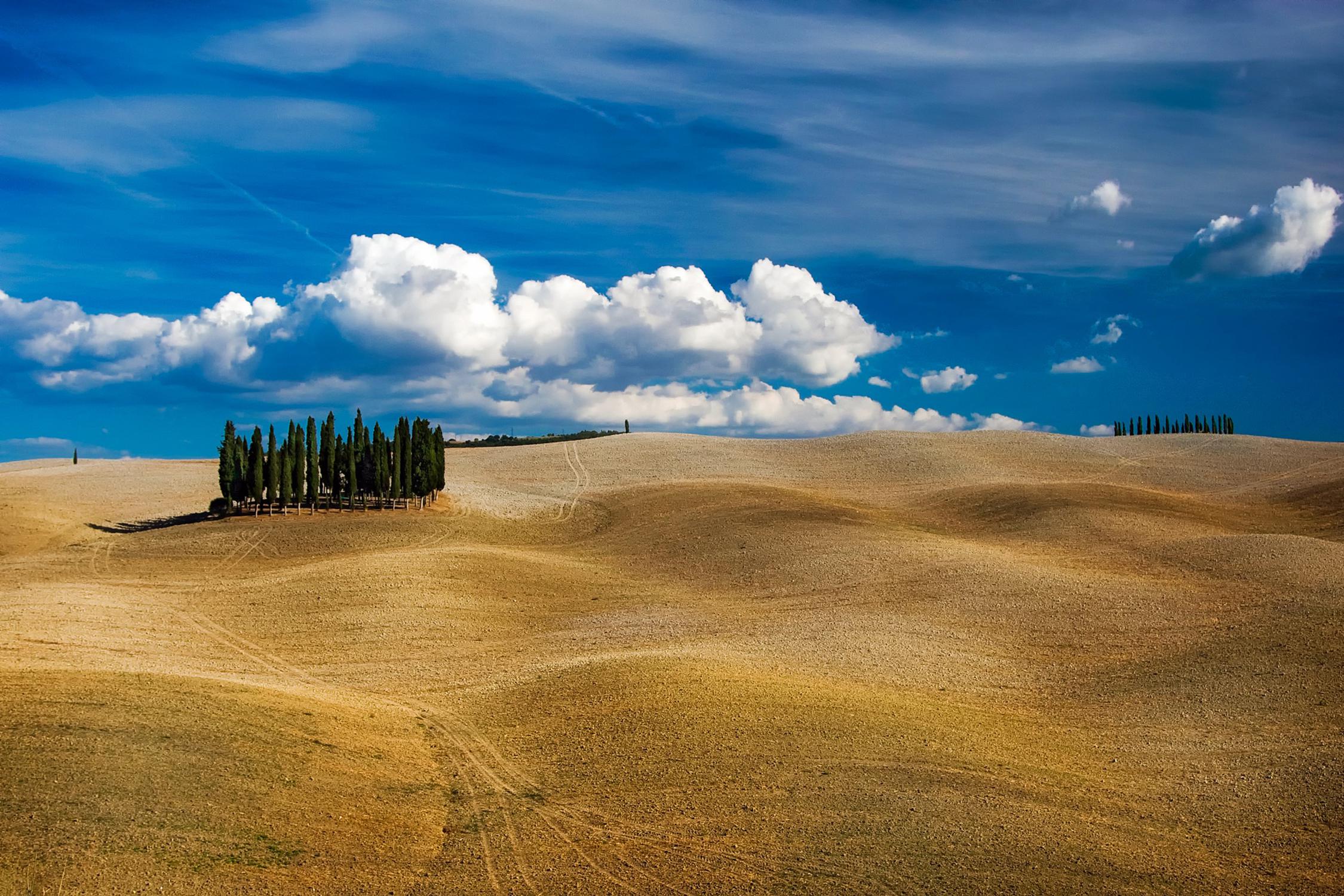 Agriturismo Borgo Dante is centrally located to discover a territory, between Tuscany and Umbria, which encloses natural treasures, cultural heritage and old traditions that certainly won't deceive your expectations.

The Territory Castiglion Fiorentino and Valdichiana

Castiglion Fiorentino is a Tuscan town of absolute value from where you can enjoy beautiful views towards the Val di Chio valley and towards the foothills of the Apennines. 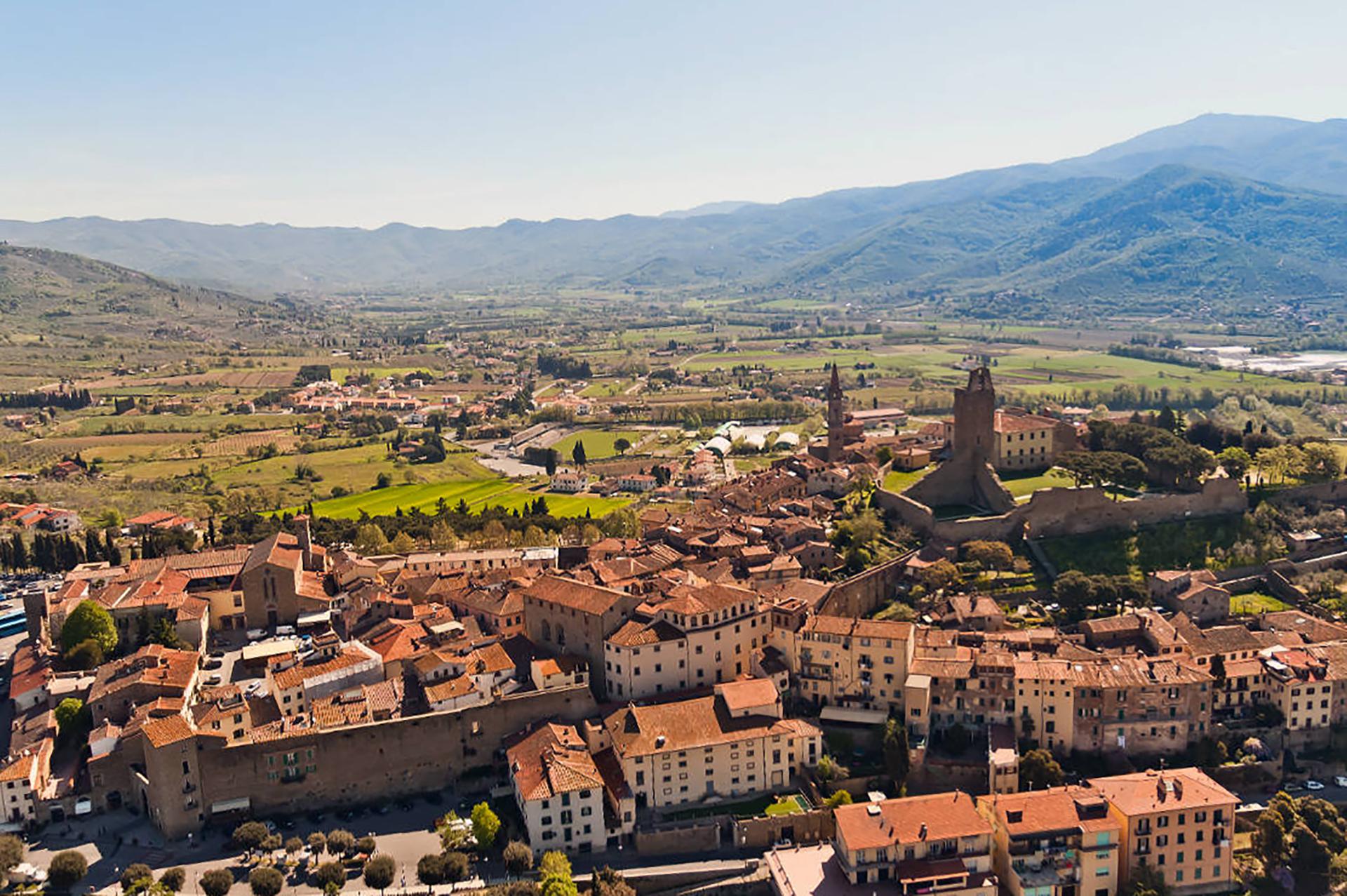 Another jewel is the castle of Montecchio (10th century), where the famous soldier of fortune John Hawkwood lived.

The town of Lucignano is also worth a visit, because its historic center preserves the original elliptical plan of a castle enclosed by towered walls. In the old town, you can admire the Town Hall of the 13th century. Here there is a small museum with paintings made by artists from Siena and Arezzo, in addition to a jewel created by late Gothic goldsmiths, the famous "tree" of Lucignano, a reliquary that is renowned as a symbol of love for young couples. There are many important religious buildings such as the Collegiate Church and the Church of San Francesco embellished with frescoes by Sienese painters Bartolo di Fredi and Taddeo di Bartolo.

Among the towns in Valdichiana not to be missed there is certainly Monte San Savino, an old Etruscan town that was then governed by the Medici family. Andrea Contucci, called  Sansovino, was born here. You can still see his workshop and two gateways, Porta Fiorentina and Porta Romana. The Cassero, with its imposing tower (14th century), houses the Museum of Ceramics.

For nature lovers there is the so-called Sentiero della Bonifica (Path of Reclamation), a 62-km long trail stretching along Valdichiana especially conceived for cyclists and walkers. The old road was used for maintenance works to the channel and the sluices and is thus an even natural path that is particularly suitable for family sport tourism. 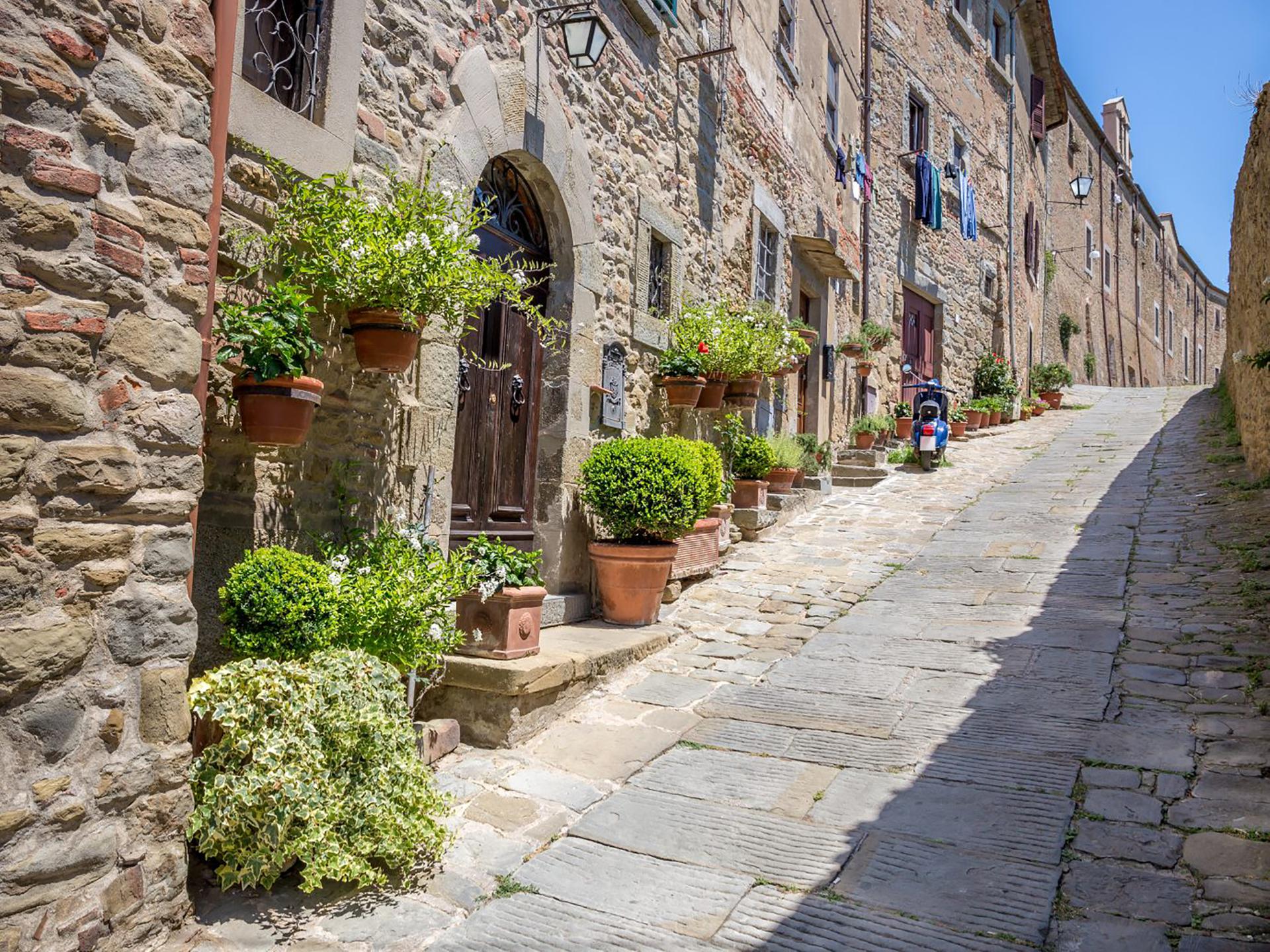 It is one of the most appreciated and visited tourist destinations, a harmonious mixture of history, culture, arts and traditions. Its glorious past in the Etruscan times is still well recognizable. Cortona is perched on a hilltop from where one can enjoy a spectacular view of the Valdichiana valley and Lake Trasimene.

The old town of Cortona can be easily visited on foot. From Piazza della Repubblica to Piazza Signorelli it's nice to walk along the famous “Rugapiana”, the main street full of shops, bars and restaurants.

A visit to the MAEC, the Etruscan museum of the town, is a must: here you can admire important finds, such as the Bronze Lamp dating back to the 5th century B.C. and the Tabula Cortonensis, a bronze artifact of the 2nd century B.C. with an inscription in the Etruscan language that is the third longest Etruscan text known in the world.

The Diocesan Museum is also worth a visit, as it contains the "Annunciation" by Fra Angelico and works by other major Tuscan artists, including Luca Signorelli, who was born in Cortona.

Cortona is rich in monumental churches. Among these we find the Gothic Church of San Francesco and the Sanctuary of Santa Margherita, which contains the body of the saint who died in 1362. The Medici fortress affords the best views of town and countryside and in the north east area of Cortona visitors can tour the hermitage called Eremo delle Celle, which was founded by Saint Francis in 1211.

The Territory Arezzo and Casentino

Arezzowas an important city during the Etruscan domination. In the higher part of the town, dating back to the Middle Ages, we find the Cathedral, the Medici Fortress, aristocratic palaces and picturesque towers. The lower part is modern and constantly expanding. The Church of San Francesco with frescoes by Piero della Francesca is not to be missed. 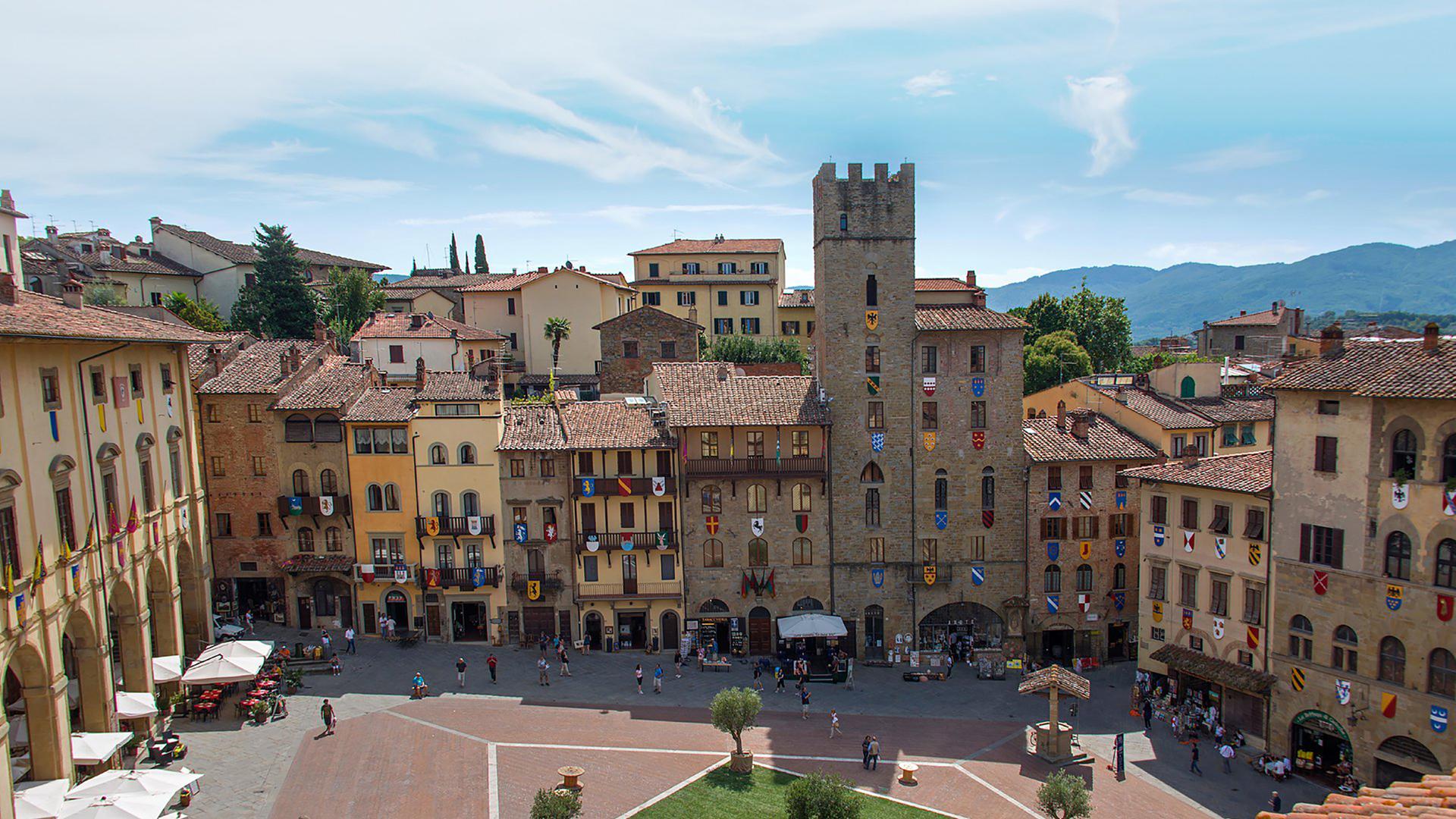 The Casentino is a place rich in arts, history, local specialties and charming landscapes to discover. There are medieval castles to visit (in Poppi, Romena and Porciano), hiking excursions in centuries-old forests in the surroundings to do and sanctuaries of great spirituality to discover.

Among these there is the Sanctuary of La Verna, which preserves a number of treasures of spirituality, arts, culture and history. Another important religious place in that area is the Monastery of Camaldoli, where Saint Romuald founded the Camaldolese Order around the year 1000. 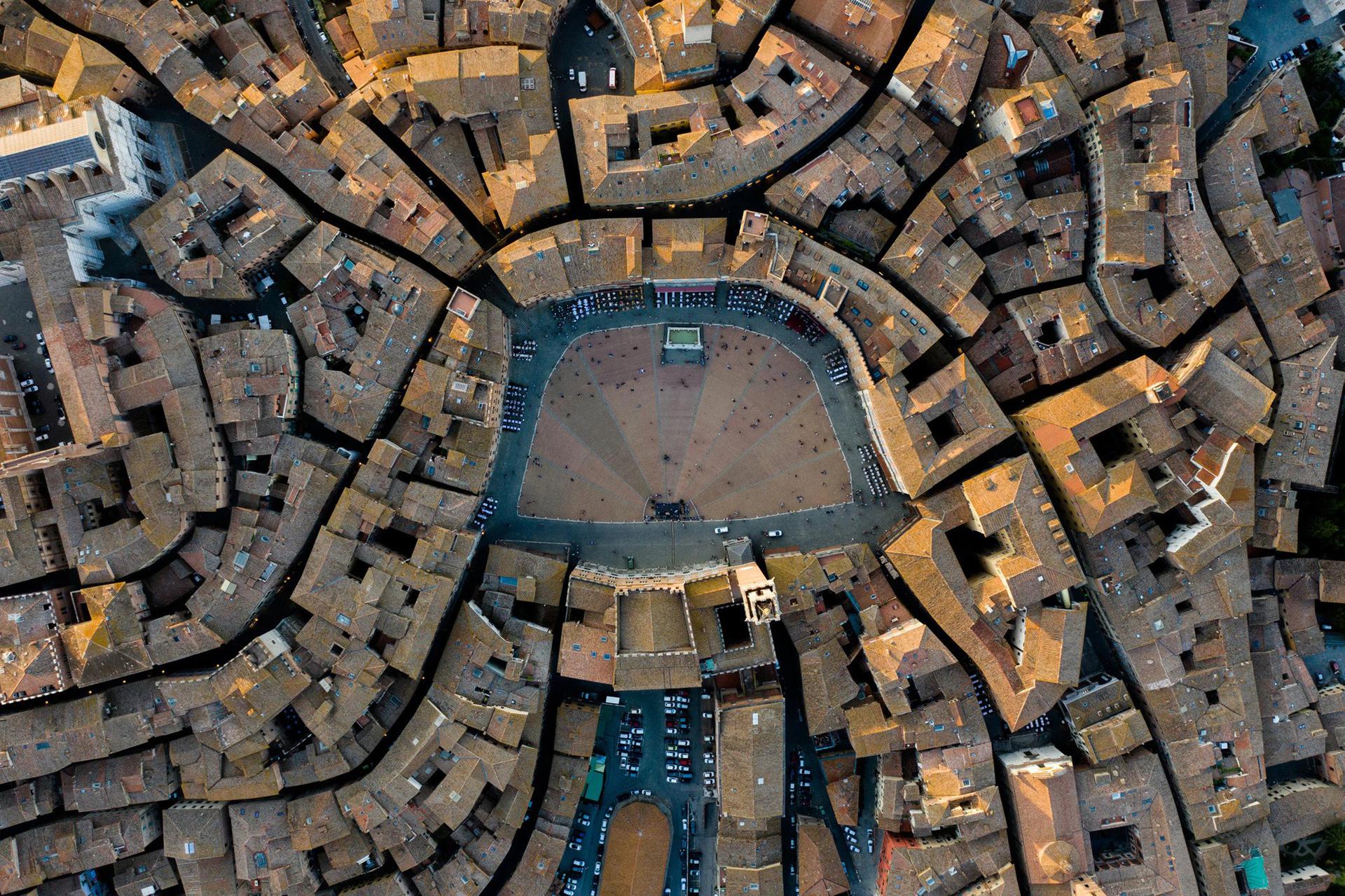 The Territory The Province of Siena

Siena is a Unesco World Heritage Site since 1995. A must-stop is Piazza del Campo, the symbol of the city. Other important monuments that deserve a visit are Palazzo Pubblico, the Museum and the Cathedral built at the end of the 12th century.

Montepulciano is a lovely medieval town, a beautiful example of Renaissance architecture. Montepulciano is known as the pearl of the 15th century where there are many famous buildings to see such as the Cathedral, the Loggia del Mercato, the Avignonese and Tarugi palaces and also the Bucelli Palace with burial urns and Etruscan and Latin inscriptions.

Other places of interest to visit in Montepulciano are the Church of Saint Agnese, the patron saint of the town, and the Civic Museum. The famous Nobile di Montepulciano is a wine that deserves a toast.

The medieval town of Pienza offers incredibly stunning views, with smooth hills and cypress tree lines of the most beloved and photographed Tuscany. The significant attractions to be visited in the old town are the Cathedral, Palazzo Piccolomini and the Diocesan Museum. Pienza is famous for the production of cheese typically made with sheep milk in the countryside farms of Val d'Orcia.

Montalcino owes its reputation to the production of the famous “Brunello di Montalcino” wine, which is well known even abroad. Montalcino is perched on a hilltop overlooking three valleys: Val d’Orcia, Val d’Arbia and Valle dell’Ombrone.

Montalcino is a town having a typical medieval layout, and the Town Hall, the Cathedral and the churches of S. Agostino, S. Egidio and S. Francesco are surely to be visited.

It is one of the most important cities in Italy that is famous for art, architecture, culture, trade and industry. Among the most renowned art and religious places of the city we find the Cathedral of Santa Maria del Fiore, the Baptistery, the Uffizi Gallery, the Bargello Museum and the Accademia Gallery. Then the churches of Santa Maria Novella and Santa Croce are real art galleries, as well as the Laurentian Library is an exceptional example of the architectural genius of Michelangelo. The important collections preserved in Palazzo Pitti, the romantic Old Bridge and the Boboli gardens are also worth a visit. 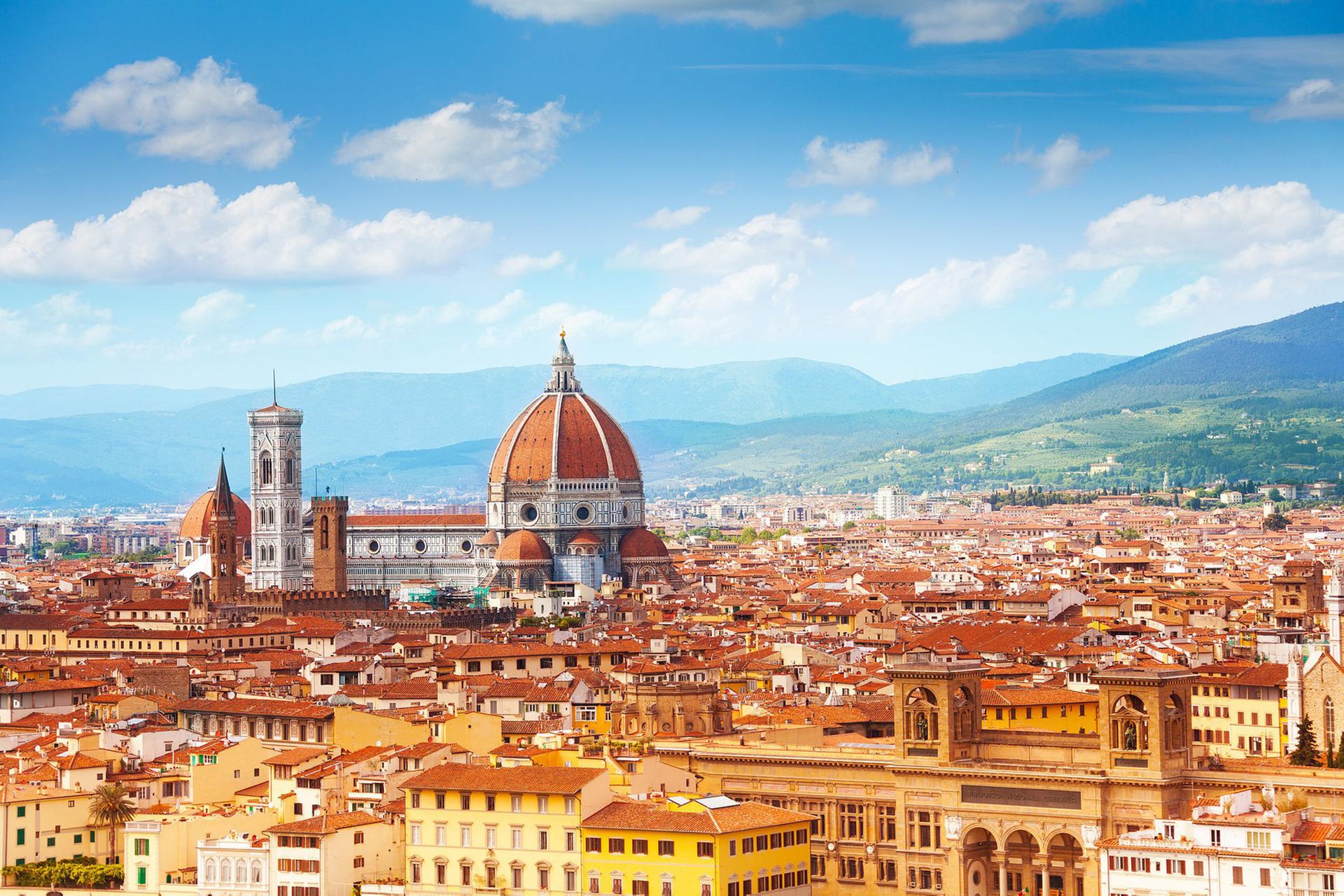 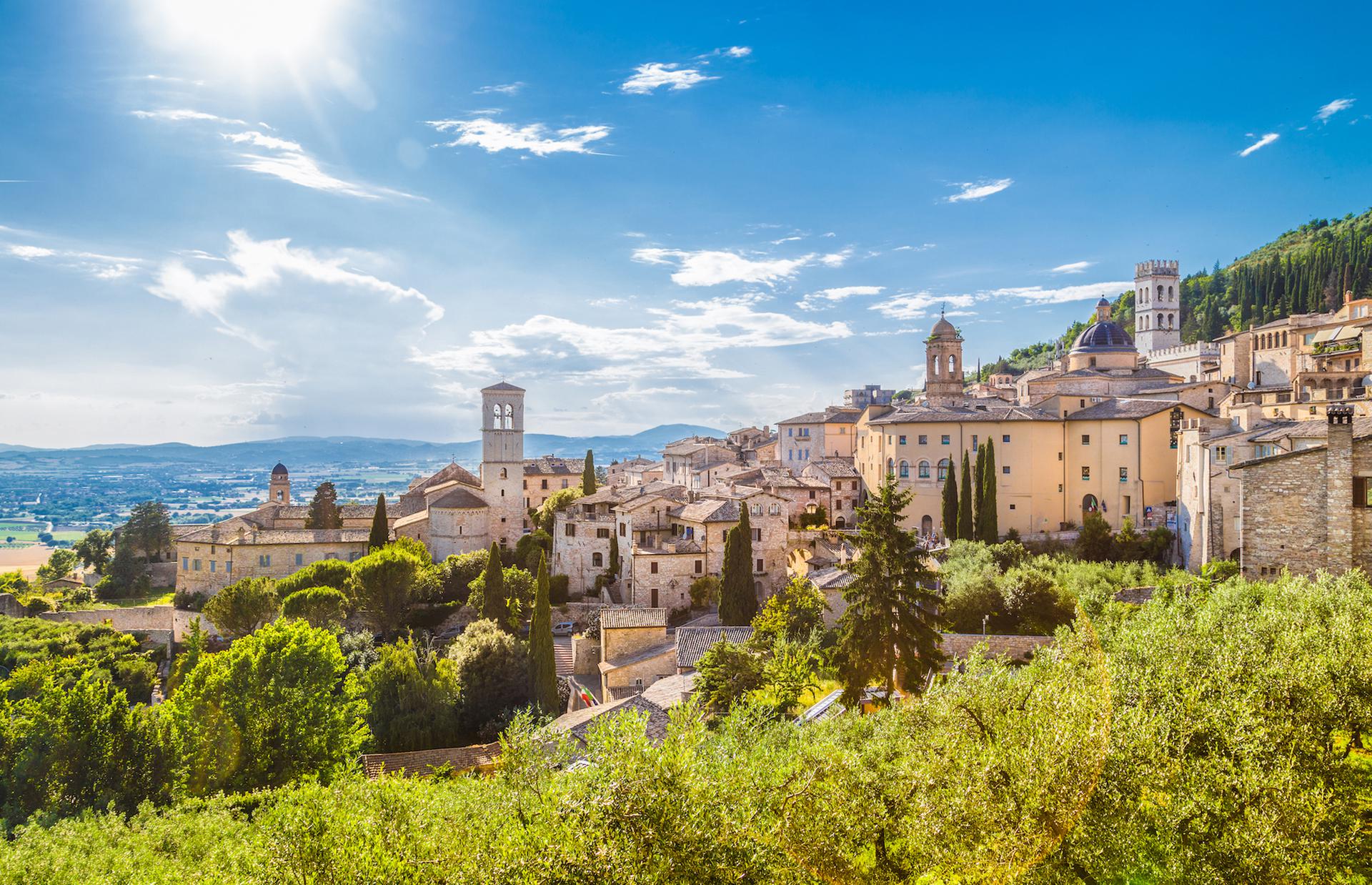 At short distance from the border with Tuscany there is Castiglione del Lago, a nice Etruscan town whose medieval walls and the ancient castle are still well preserved. It rises on a promontory that once formed the fourth island of Lake Trasimene, the fourth largest lake in Italy. The area of Trasimene is full of fascinating attractions and in the summer it is possible to visit its islands or the towns in the surroundings. The best beaches are near Castiglione del Lago.

Perugia is the capital of Umbria. It is an important cultural and tourist destination that has been seat of a prestigious university for over 700 years with students coming from all over the world.

Among the attractions to visit there are the 13th century Main Fountain, a lovely walk in the city center, Palazzo dei Priori, the Renaissance Fortress Rocca Paolina, the National Gallery of Umbria, which is one of the most important art galleries in central Italy.

Assisi is the most beloved and renowned spiritual town in Italy. The town is the birthplace of Saint Francis, Patron Saint of Italy. The main attraction is the Basilica of Saint Francis built in the 14th century, an important pilgrimage destination. It consists of two churches: the upper one was built between 1228 and 1230 and is embellished with frescoes made by Giotto and Cimabue on Saint Francis' life; the lower one was built between 1230 and 1253. Attached to the Basilica is the Franciscan monastery founded by Saint Francis in 1206. Another magnificent example of Gothic architecture is the Church of Santa Chiara where you can see the crucifix that spoke to Saint Francis according to what was handed down.

Another town not to be missed in Umbria is Gubbio of Roman origin. The place to start a tour of Gubbio is Piazza Quaranta Martiri, named after forty citizens shot by the Nazis in 1944. Here you can visit the Cathedral of the 13th century, which is an admirable example of Gothic architecture. Other important monuments in Gubbio are the Palazzo Ducale, the Palazzo dei Consoli and the Roman Theater, a perfectly preserved 1st century amphitheater located at the foot of the town.